Woman cleared over baby boy’s death due to… 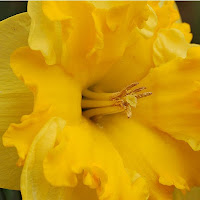 MEDICATION: Razadyne (galantamine) is an FDA-Approved daffodil extract for Alzheimer’s. Check out the results of this study in which it significantly lowered mortality & eased cognitive decline.

An important study showed a significantly lower mortality rate in patients who were treated with galantamine, a prescription medicine for mild to moderately severe Alzheimer’s disease, versus those who received placebo. Patients treated with galantamine also had significantly lesser decline in cognitive impairment after two years, compared to patients in the placebo group, according to investigators presenting the data at the American College of Neuropsychopharmacology 51st Annual Meeting in Hollywood, Fla. Janssen Research & Development, LLC, sponsored the study.

Galantamine is the generic name for the brand-name drugs Reminyl (UK) and Razadyne (USA). It is also spelled, “Galanthamine.” In treating Alzheimer’s, it competes with two similar drugs used to control levels of brain acetylcholinesterase in dementia patients.

At the study’s final interim mortality analysis, an independent Data Safety Monitoring Board recommended early termination of the study due to an imbalance of deaths between the treatment group and the placebo group. Subsequent unblinding of the data indicated that mortality was statistically significantly lower in patients treated with galantamine, compared to patients who received placebo [3.1 percent versus 4.9 percent respectively; (P=0.021)]. In the final analysis, there was a total of 89 deaths; 33 (3.2 percent) in the galantamine group and 56 (5.5 percent) in the placebo group (P=0.011).

The treatment group also had significantly lesser cognitive decline measured by the change from baseline in the Mini Mental Status Evaluation (MMSE) at month 24 of the study, compared to the group treated with placebo. The mean MMSE scores deteriorated from a baseline of 19 to 16.9 and 17.5 for the placebo and galantamine groups, respectively (P<0.001). The MMSE is a validated measure of cognition.

Additionally, there was a significantly greater decline from baseline in MMSE at month 6 in the placebo group compared with the galantamine group (P<0.001). The change in activities of daily living, as measured by the Disability Assessment in Dementia (DAD) scores from baseline to month 24, was significantly worse in the placebo group than in the galantamine group (P=0.002). The DAD is a validated measure of activities of daily living.

The randomized, double-blind, placebo-controlled clinical study was designed to evaluate the safety and efficacy of long-term (two-year) treatment with galantamine in patients with mild to moderately severe Alzheimer’s disease.

Approximately 49 percent of the placebo group and 54 percent of the galantamine group reported at least one Treatment Emergent Adverse Event (TEAE). Approximately 12 percent of patients reported serious adverse events in both groups. Patients who were treated with galantamine reported numerically more TEAEs, most notably gastrointestinal disorders (nausea, vomiting). The incidence and types of serious AEs were similar in both groups, except for mortality, which was significantly higher in the group of patients that received placebo.

The trial enrolled 2,051 people (1,023 to the placebo group, 1,028 to the galantamine group) and was conducted at 127 sites in 13 countries. Patients in the study were between the ages of 45 and 92; their mean age was approximately 73 years. The majority of patients was female (65 percent).

The galantamine group initially received 8 mg of drug daily, and the dose was increased to 16 to 24 mg daily during the first 12 weeks of the study. Thereafter, patients were maintained on 16 to 24 mg of galantamine daily.

Alzheimer’s disease, the most common form of dementia, is a degenerative brain disease that is not a normal part of aging. Alzheimer’s disease gradually destroys a person’s cognitive and functional abilities, including memory and the ability to perform activities of daily living, such as bathing and eating.

Alzheimer’s disease is the sixth leading cause of death in the United States, estimated to affect more than five million people. It is estimated that there were 35.6 million people with dementia, including Alzheimer’s disease, worldwide in 2010. This number is projected to nearly double every 20 years, increasing to 65.7 million in 2030 and 115.4 million in 2050. The total worldwide costs of dementia, including Alzheimer’s disease, were estimated to be around one percent of global gross domestic product (GDP) in 2010, at more than US $600 billion. This includes costs attributed to informal unpaid care, community or residential-based care and treatment.

Galantamine is an acetylcholinesterase inhibitor approved to treat symptoms of mild to moderate Alzheimer’s disease such as memory loss. There is no evidence that galantamine alters the course of the underlying process of dementia. While the precise mechanism of galantamine’s action is unknown, it is believed to achieve its therapeutic effect by increasing the concentration of the neurotransmitter acetylcholine by inhibition of the enzyme cholinesterase which breaks down acetylcholine.

Although the cause of cognitive impairment in Alzheimer’s disease is not fully understood, it has been reported that neurons that produce acetylcholine, a neurotransmitter, degenerate in the brains of patients with Alzheimer’s. The degree of this neuronal loss has been correlated with degree of cognitive impairment and density of amyloid plaques, a neuropathological hallmark of Alzheimer’s disease.

In the United States, galantamine is sold as RAZADYNE® and RAZADYNE® ER by Janssen Pharmaceuticals, Inc.

In clinical trials, once-daily treatment with RAZADYNE® ER was well tolerated and the adverse events were similar to those seen with twice daily RAZADYNE® tablets.

Because of their pharmacologic action, cholinesterase inhibitors have vagotonic effects on the sinoatrial (SA) and atrioventrical (AV) nodes, leading to bradycardia and AV block. These actions may be particularly important to patients with superventricular cardiac conduction disorders, or to patients taking other drugs concomitantly that significantly slow heart rate. In clinical trials, galantamine HBr was associated with more frequent reports of bradycardia and syncope vs placebo. Post marketed surveillance of marketed anticholinesterase inhibitors has shown that bradycardia and all types of heart block have been reported in patients both with and without known underlying cardiac conduction abnormalities. All patients should be considered at risk for adverse effects on cardiac conduction.

Cholinesterase inhibitors may increase gastric acid secretion. Patients should be monitored closely for symptoms of active or occult gastrointestinal bleeding, especially those with an increased risk of developing ulcers, eg, those with a history of ulcer disease or patients using concurrent nonsteroidal anti-inflammatory drugs.

Cholinesterase inhibitors are believed to have some potential to cause generalized convulsions. Seizure activity may also be a manifestation of Alzheimer’s disease. In clinical trials, there was no increase in the incidence of convulsions with galantamine HBr compared with placebo.

Cholinesterase inhibitors should be prescribed with care to patients with a history of asthma or obstructive pulmonary disease.

In controlled trials in elderly subjects with MCI, 13 subjects on RAZADYNE® (n=1026) and 1 subject on placebo (n=1022) died of various causes. About half of the RAZADYNE® deaths appeared to result from various vascular causes (myocardial infarction, stroke, and sudden death). RAZADYNE® and RAZADYNE® ER are not indicated for the treatment of MCI.

The most common adverse events in clinical studies occurring at rate of at least 5% and at least twice that of placebo at the recommended maintenance dose of either 16 or 24 mg/day under conditions of every 4 week dose escalation for each 8-mg increase were nausea, vomiting, diarrhea, anorexia, and weight decrease.

At Janssen Research & Development, LLC, we are united and energized by one mission—to discover and develop innovative medicines that ease patients’ suffering, and solve the most important unmet medical needs of our time. As one of the Janssen Pharmaceutical Companies of Johnson & Johnson, our strategy is to identify the biggest unmet medical needs and match them with the best science, internal or external, to find solutions for patients worldwide. We leverage our world-class discovery and development expertise, and operational excellence, to bring innovative, effective treatments in oncology, immunology, neuroscience, infectious diseases and vaccines, and cardiovascular and metabolic diseases. For more information on Janssen R&D, visit http://www.janssenrnd.com/.

The TikTok Health at Every Size Influencers Inspiring Me | Well+Good

The 50 Safest College Towns in America for 2022

What Do You Want From a Relationship? 5 Questions To Ask | Well+Good